Nominations for the Coffee Party USA Board of Directors are now closed. No more applications will be accepted. Thanks to those of you who submitted applications. The Board Development Committee will be contacting you.

The next deadline is for those want to vote in the upcoming Coffee Party Board of Directors election. They have until June 8, 2014 at 11:59:50 PM Hawaiian-Aleutian Standard Time (June 9 at 5:59:59 AM Eastern Daylight Time) to become members or renew their memberships. Those who do not pay by the deadline will be ineligible to vote.

Hurry, as the deadline is less than 10 hours away!

Coffee Party USA is holding elections for eight (8) positions on the Board of Directors this summer. To run, you need to be a dues paying member by June 1, 2014. To vote, you must be a member by June 8. Click on the link to renew.

Vince Lamb, Secretary to the Coffee Party Board of Directors.

Christian Science Monitor: Can 'Occupy Wall Street' really get money out of politics?

While 'Occupy Wall Street' has avoided specifying demands, money in politics is a clear target. Supporters of campaign-finance reform hope the movement gives their cause momentum.

The 'Occupy Wall Street' movement has been catching flak for its perceived lack of clear goals, but the protests have already put new energy behind one big idea: reforming the role of money in politics.

Advocates of campaign finance reform say the protesters in New York and elsewhere have, in recent weeks, brought the question of corporate influence closer to the front burner of national discourse, adding fresh momentum to their own efforts.

"I can't tell you how thrilled I am," says Annabel Park, founder and president of Coffee Party USA, a group that promotes campaign finance reform with grass-roots support. "It's like a miracle," she says. Even though many Americans worry about the money in politics, "it's hard to get people's attention on this."

Ms. Park says she's seen synergy between her group and Occupy Wall Street, which has spawned a range of nationwide demonstrations since protesters set up camp in Manhattan's Zuccotti Park on Sept. 17. Some Coffee Party followers have joined in Occupy rallies. And Park says she's seen a rise in public support for her own group over the past month.

Even before Occupy Wall Street began, the Coffee Party was planning an "Enough is enough" rally in Washington on Oct. 29. That event could see its ranks grow, as it now becomes part of a larger season of protest in America.

Similarly, an online petition drive called "Get Money Out" launched in late September, with the goal (shared by the Coffee Party) of amending the Constitution so that corporate money can be banned from politics. Dylan Ratigan, who hosts a news show on the MSNBC network, has spearheaded the effort, which has attracted about 190,000 signers as of Thursday.

Much more (non-Coffee-Party-related) at the link in the headline.

Tonight between 7:30 and 8:30 PM EDT. Scheduled interviewees are Egberto Willies and Kerry Helmer. Interviewer is the mod of this community.

Yes, folks, I am now an internet radio host.

Local politics -- schools, zoning, council elections -- hit us where we live. So why don't more of us actually get involved? Is it apathy? Dave Meslin says no. He identifies 7 barriers that keep us from taking part in our communities, even when we truly care.

The T-shirt designs below were submitted by nonnie9999 at Hysterical Raisins for Coffee Party USA's Yard Sign and T-shirt contest as part of the Coffee Break to Save America campaign. 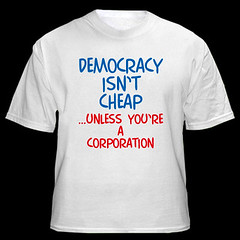 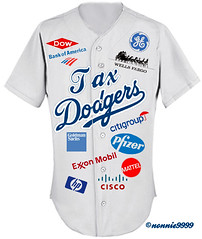 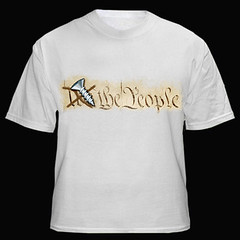 Right now, Coffee Party USA is voting on the slogans that will be on our lawn signs. If you're on Facebook, vote by surfing here. If you've already voted, thank you!

Here's to slogans that make you laugh, then make you think. Here's to hoping they inspire you to take action, too. 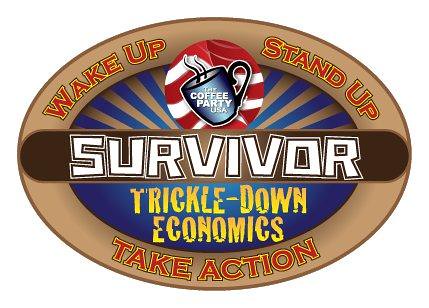 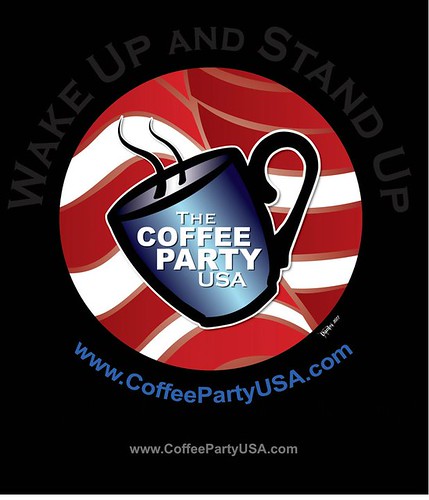 Yes, folks, these are new logos for Coffee Party USA.

The top one is the logo for our Survivor: Trickle-Down Economics video project, which is part of our Coffee Break Campaign to Save America. It's also the current logo on Coffee Party USA's Facebook page. The bottom one was the previous logo on the Facebook page.

Don't worry about the old logo. It's still being used on the website. 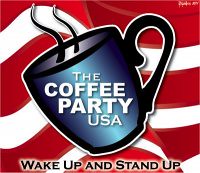 Description: The Coffee Party reached 350,000 followers on Facebook today, a major milestone. Have coffee with Annabel and the Coffee Party members. Call in to discuss what's on your mind. Check out the latest blog post: Choose Reality Over Ideology. Topics that we may cover: democracy movement raging in America, Coffee Party campaign for tax week, budget crisis, Libya, earthquake in Japan, Founding Membership drive, why people join, looking back on the first year of the Coffee Party and looking forward.

Above crossposted to the Coffee Party USA community on Dreamwidth.

Guest post by Camillus
Camillus is a former Republican Party officer in the Northeastern United States. His writing has been featured on several blogs, including FrumForum.

“The political parties are like Coke and Pepsi.” If I have heard that expression once, I’ve heard it a thousand times.

I don’t think it’s an apt analogy though. It certainly serves to illustrates the limited range of political choices available to us- two products that are fundamentally similar and differ, principally, in aesthetic details and points of emphasis. But soda is a relatively benign product. Sure, we all know it isn’t nutritious, and that consuming too much of it will damage your teeth, but it’s not a particularly dangerous beverage.

Are our political parties today really analogous to soda? I think not.

( Collapse )
This post is a reminder that Coffee Party USA is not merely a moderate to liberal response to the Tea Party; it also aspires to the formation of a left-right populist coalition to challenge the dominance of the corporations and the rich in our political system.

Above crossposted to the Coffee Party USA community on Dreamwidth.
Collapse